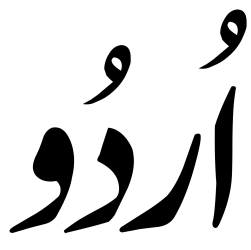 Urdu (اُردُو) & Hindi (हिन्दी) are indeed the same language in so far as they share the exact same grammar. Urdu was carved out of Hindi, in 1947, in the same, tumultuous, murderous, disastrous moment that Pakistan was carved out of India (by some British arsehole colonialist pig, along with Netanyahu, Gandhi(?, i forget. (not Indira Gandhi (no relation) (who was shot full of holes in 1984 by her Sikh bodyguards, after she had ordered a siege of a Sikh temple)-

What followed:
1. a mass-migration of Muslim Indians to the newly proclaimed, created Pakistan. One million people dead.

2. On one hand, the nationalization / “Hindu-ization” of Hindi (becoming more Sanskiritzed, i.e. more Sanskrt words were artificially introduced into its vocabulary. Hindi is a direct descendant of Sanskrt, so theoretically these words were not new, but mostly had not been in active use, & largely remained quite decorative, or more aristocratic, or official / newspaper language. Too, Devanagari (the script of the Gods), the script / alphabet of Hindi followed in this Sanskritization.

In this way, Hindi was – more explicitly, & in marked contrast to Urdu – re-born as the new & simulataneous ancient, primordial language of Bharat Mata, Mother India. (Parenthetically, Sanskritists believe that Sanskrt forms a transcendental field, from which all* language emerge. & that Sanskrt resonates with the Chakras of the body.

3. At the same time; the nationalization, or “Muslim-ization” of Hindi, into Urdu: again, the same language, same grammar. Urdu underwent similar processes to Hindi, but then in direction of Arabic, Persian cultures: the Nastaʿlīq script/alphabet was adopted (from Persian, Arabic). Further, analogous to the Sanskritization of Hindi, the vocabulary & general flavour, cultural references of/in Urdu began to be taken more from Arabic/Persian languages & cultural histories.

Histories were written, over-written. re-written. This was a direct result of the National Census forced upon the Indian population from 1865 – 1947 (the year Pakistan was created. Prior to this census Hindus & Muslims lived together, in the same villages, towns etc. Sharing places of worship even, i believe.

From 1865 onwards, people were asked to identify either as Hindu, or Muslim. The British, as we know from its historical, & present incarnations / iterations – like categorizing, separating; themselves & others, from others & themselves.

The British, it wld appear, suffer from an inferiority complex thinly disguised as a superiority complex. & they express their tendency to territorialize by pissing in different corners of the world.